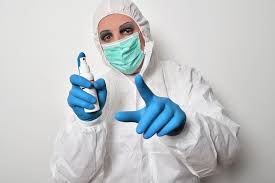 This Easter was one of the best – if not THE best – I have ever experienced.  Why? Not only was the tomb empty, but so were the stores and the streets as well as the church buildings. We had none of the usual distractions: e.g.  bunnies, egg hunts, parades, Easter finery.  The real Easter message of Resurrection was there!

So where are we? Like those early apostles “locked in.” Not as they were, for fear of the authorities, but because of fear of the virus.

And where are we? Perhaps out walking, like those two men on the road to Emmaus. And like them, a bit confused and uncertain and unsettled, not because we didn’t recognize the Risen Lord, but because so much about the virus is unknown.

So in these three ways we meet those early disciples in their post-Resurrection fear, confusion, and frustration.  Into those situations, and ours, Jesus appears, and his presence makes a significant difference. As he met them where they were, so he meets us where we are today amidst all the unsettling reality of Covid 19. And isn’t that the central Easter message – that Christ is risen and meets us wherever we are, bringing us hope and love and peace.

Christ is Risen, the Lord is Risen indeed!! Alleluia!!

This site uses Akismet to reduce spam. Learn how your comment data is processed.